Albert Sammons (1886-1957) and William Murdoch (1888-1942) performed regularly together in chamber concerts during 1916 to 1917, both had joined the army and were travelling around the country dressed in khaki as part of the propaganda effort on the home front. Columbia in order to enhance their ongoing expansion into orchestral, instrumental and chamber music repertoire recorded the duo in a number of recordings including both the Beethoven's Spring and Kreutzer sonatas, incidentally the first recordings to be made of these two compositions, even though they were savagely cut. They were sonically primitive and even Columbia thought they needed replacing in the catalogues by 1923 when Murdoch was now paired with Arthur Catterall, Sammons having become an artist for Aeolian Vocalion. When the Western Electric system was introduced Sammons and Murdoch made their complete recording in 1926, again for Columbia.


Both musicians had to learn a new instruments as part of their army training, Sammons had to learn a wind instrument, (which one?) in the Grenadier Guards and Murdoch the trombone. Murdoch was unfit for service and sent to Scandinavia for light duties which effectively split the duo up. 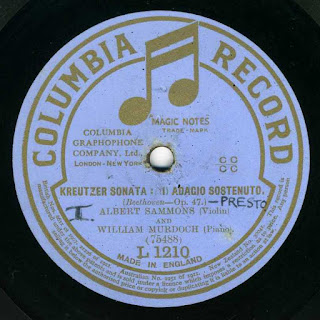 I have been away from posting anything for quite a while, and the main reason that I'm stuffing something onto the blog now is because I was not well satisfied with the way I was making my transfers and decided to try a different approach and see if anyone thinks it is an improvement. I'm not looking for a clean sounding reproduction, but instead an improvement in the dynamic and timbre of the instruments.

I have to warn you here this means my transfer are more than a bit noisy but hopefully with better fidelity to the original performance.

Albert Sammons in an interview for April 1924 issue of The Gramophone outlines the problem very well:-

'One critic said that it wasn't always possible to pick out the melody in the piano part, and that the violin should keep under in parts to allow the piano a chance to stand out more clearly in its solo passages. This, however, is no fault of the ensemble of the players; both Catterall and Murdoch are pastmasters of chamber music playing, but to have as perfect a performance as one could get on the concert platform would entail more than the present amount of expense and work allowed for recording. It would be necessary to have two or three finished records, so that the player could (pencil and music in hand) mark every passage as they listened, so as to be able to give and take accordingly for the final and master record. Even then a good deal would be left to chance. At times it would be necessary for the violin to play very softly to allow the piano its equal share of tone; also the pianist would at times require almost to overplay in order to get the balance right, owing to the fact that in many passages of difficulty the violinist wouldn't always find it possible to play softly enough, and generally the piano is harder to "get through" when the two instruments are going full strength, unlike in a concert hall, where it is generally the reverse. Also the violinist is nearer the horn when recording.

'Producing records is, after all, an expensive venture, and it would need someone in the nature of a millionaire to make the possibilities of recording as we should like to have it, and to cater for the public requiring perfect records.

'Still, it is a hundred per cent better than it was a few years ago, owing to the experience of recorder and artist, the latter having to play quite differently from what he is accustomed to on the concert platform.'

Now it is interesting that Sammons thought that the results in 1924 were 'a hundred per cent better than it was a few years ago' that is when he made the 1917 Kreutzer recording, and it is true that the recording, as fine as it is for 1917, is really something of a travesty when put against recordings from the introduction of the Western Electric system.

I decided to go back through the process I was using and try and work out a different way to re-balance early recordings, more particularly acoustic recording. I had concluded for quite a long time that it is not really possible to manipulate these recordings so that it might reproduce something like a 'modern balance' but I thought it could be possible to produce something like a 'modern sound.'

There are two main factors in the original recording process that are against getting a modern balance, firstly the position of the instruments would not be that found in any normal setup, we know this from surviving photographs of recording sessions and Sammons describes above how it was in the studio when making a recording with piano. Secondly the room used was not designed for making a pleasing sound, say like a concert hall, but instead adapted to project as much of the sound into the recording horns as possible.

Our pioneering recording engineers, or 'experts' would have worked backwards from a successful recording, having previously noted down the position of instruments, together with the size and arrangement of the recording horn or horns etc. Over time this was refined until something that sounded marketable could be achieved. In the Kreutzer recording the violin was quite close to a recording horn, the piano however, producing as it does more sound energy, would be further away and probably two horns were used in this recording with one positioned to record each instrument at their optimum distance and then mixed down through a connector and directed to the recording diaphragm. Although the sound in the studio would be a bit odd and unbalanced to those playing, it would however translate into something approaching an identifiable performance a when played through a contemporary gramophone, although in order to avoid blast, or even broken grooves, especially in the lower octaves, the piano had to be recorded quieter.

The studios that these recordings were made in also produced quite a lot of reverberant hard sound, the size of the room was often modest and the walls were very often panelled with wood with no soft or absorbent materials being present. In early recordings this spacial ambience cannot be heard very well, however it holds that it must be in the grooves, as indeed should the timbre of the instruments should be too, if all a bit faint and distorted by the recording equipment.

Below is a photograph of the recording room that Sammons and Murdoch used as it appeared a few years later, it may give an idea of what this room probably sounded like.


So the sound I found myself looking for was to ignore the balance and approximate something as best I could to the timbre that instruments should make. This would mean also that the instruments would be unbalanced, and as Sammons states the loudness of the violin and piano would be reversed in comparison to a modern recording. Also some more obvious ambience should be now audible and hopefully result in, if nor all, at least a much greater increase in the upper and lower harmonics - something of a tall order.


With that in mind I reverse engineered the recording to an approximation of the sound that could be heard in the recording studio and did this by looking at how the sound energy of each frequency could be equated to a modern recording over its frequency range, this method also avoided using any subjective balancing by ear. I found that the problems with using ones hearing, except in the fine tuning and final stages, is that you just can't help pulling towards the sound you want rather than the sound that is actually incised into the grooves, a process that results in introducing your own layer of sonic distortion.

There are two unfortunate 'side-effects' with my approach, the first is that the noise level is greatly increased as various recorded frequencies of the instruments are often masked by the surface noise of the original recording, sometimes quite severely. If filtered out, and as yet there is no way around the problem, we would quickly loose something of the music. The second problem is of course the balance of the instruments is a bit wrong. The piano in the Sammons and Murdoch Kreutzer recording sounds far away and generally fainter, but with the advantage of more fidelity, quite a lot of ambience together with the bonus of lower and upper octaves more easily heard as indeed are the overtones on both the instruments are too. The violin being so much closer to the recording horn produced a less resonant sound and in some places, as when the strings are plucked at the end of the first movement, you can hear quite well the sound echoed inside the recording horn with some incidental resonant frequencies of the metal horn making their appearance.

Although the surface noise can be more than a little bit annoying at first the filtering mechanism in our brains is well adapted to cope with it and hopefully to a greater or lesser degree allows us to more easily loose ourselves in the performance rather than having to make allowances for the odd acoustics of the original recording.

We often hear that the acoustic process could not record certain frequencies but this is not the case, they are there, but both a little messed up and then masked by a lot of noise - a purely mechanical recording process must pick the sound up but as when looking through an ancient window pane the light and image transmitted through the glass is all a bit distorted even though we find it difficult to work out what we are seeing light and image are transmitted through the glass.

This whole exercise would not be very commercial enterprise but then as I am looking to understand, enjoy and evaluate a performance, in this case one which is over 100 years old, I'd rather hear a 'warts and all' sound than iron out all the imperfections in the recording process and therefore kill the performance in the process of restoration.

Apart from the re-balancing of the recording only de-click, de-crackle and the removal of  the more severe rumble below 100Hz or so has been applied.

As you may think this is all guff, any comments or suggestion are gratefully receive!

Well if you have got this far down the page I have added the Arthur Catterall (1883-1943) and William Murdoch version issued on the same catalogue numbers for August 1923. Still an acoustic recording but better in some ways although by this time the process of making records with a quieter shellac, and the recording equipment much modified and generally improved. The position of the two players however seems very much the same and if anything the piano has now been moved even further away. 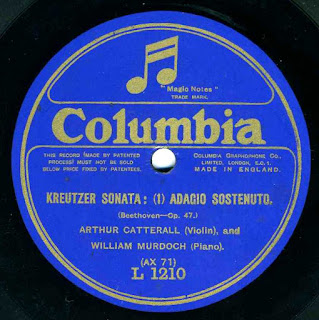