I've been away from this blog since 2015 so as this is a New Year and time for resolutions, I thought also to do something to distract me from the real world. Not sure if my resolution or the world will stop first but I won't think too deeply about that for now and just stick to the music. 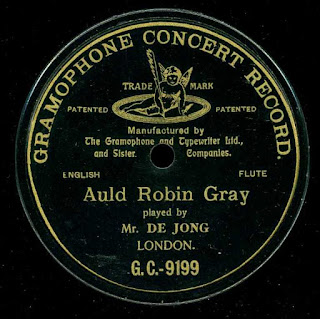 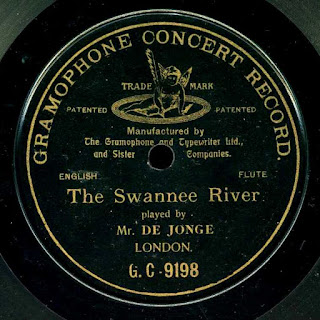 Edward de Jong (1837-1920) is the oldest surviving flute player to have recorded.  I find it quite staggering that someone who played flute with the Gewandhaus Orchestra in the 1850's can even be heard today, but that he also played with Jullien's Orchestra also before he went on to become first principle flute of the Hallé Orchestra at its inception 160 years ago even more amazing.


De Jong studied at the Cologne Conservatory until 1850 when he moved to Leipzig to take private lessons with Wilhelm Haake (1804-1875). A pupil of the flautist Anton Bernhard Fürstenau (1792-1852). Haake had joined the Leipzig Gewandhaus Orchestra in 1821 and de Jong often deputised for him in the Gewandhaus Orchestra. At this period the orchestra was conducted by Julius Rietz (1812-1877) who if he is remembered today is through his most celebrated pupil Sir Arthur Sullivan. It was at this time that de Jong met with Franz Liszt, whe encouraged the young flautist and gave him a number of letters of introduction. In 1855 de Jong had moved to become a flautist in the Amsterdam Orchestra under August Mann (1825-1907), but being dissatisfied there he travelled in 1855 to London arriving so he said with with only 1s 6d of Dutch money in his pocket, nevertheless he still succeeded in joining the famous Jullien's Orchestra. [One wonders if he actually travelled back with Mann, who had incidentally only gone to Amsterdam to conduct the orchestra before returning to London to take up the conductorship at the Crystal Palace?]
Louis Antoine Jullien (1812-1860) is now rather difficult to assess, he was certainly a showman, probably a charlatan, certainly a bankrupt fleeing his Paris creditors and lastly mad.  Little wonder that his career was so interesting having to live up to his full name of Louis George Maurice Adolphe Roche Albert Abel Antonio Alexandre Noë Jean Lucien Daniel Eugène Joseph-le-brun Joseph-Barême Thomas Thomas Thomas-Thomas Pierre Arbon Pierre-Maurel Barthélemi Artus Alphonse Bertrand Dieudonné Emanuel Josué Vincent Luc Michel Jules-de-la-plane Jules-Bazin Julio César Jullien. Despite the bejewelled baton, the gold chair and certain enhancements of the storm sequence of Beethoven's Pastoral symphony by shaking vigorously a large box of dried pees, Jullien generally did try to bring more 'serious' music to his concerts despite the boos from his devotees!
In 1856 Charles Hallé was asked to form an orchestra for the Art Treasures Exhibition at Manchester that scheduled to open the following year. The first concert was held on the 6th of May 1857 and it is quite probable that the jubilee of this event prompted de Jong to make his recordings fifty years later. De Jong, recalled that he had been interviewed by Hallé in London before going to Manchester to perform with the Orchestra at Manchester which was made up from an amalgam of Jullien's and Hallé's musicians. This event must have been of some significance to de Jong by 1907 and surly prompted the recordings. This exhibition although not as famous as some, probably had the largest collection of art put ever put together in one place.


He clearly preferred to stay in Manchester and on the founding of the Hallé Orchestra in following year de Jong became their first principle flute participating at their inaugural concert on the 30th of January 1858. De Jong held this position until 1870 when he left to established his own orchestra at Manchester, much to Hallé's ire.  Much of de Jong's time was then taken up as an active conductor at the large exhibitions and popular resorts including posts as Musical Director of the Winter Gardens in Blackpool, Southport and Buxton. He was something of a showman in the Jullien way, although without anything like the same extravagance, he did not as Hallé aim to satisfy the public with too serious a program of classical music but aimed at the lighter and more popular music of his day. From 1893 until 1906, de Jong taught flute at the Royal Manchester College of Music before retiring from this position in 1907 at the age of 70.

By good fortune there is a contemporary review of of these two records given in The Manchester Guardian, this must have been one of the earliest sustained series of record reviews to appear in a British newspaper for this time.  In the July 16th 1907 issue the following was penned 'Another good record is the one of Mr De Jong's flute-playing which must be still in the memory of older concert-goers in Manchester. The flute tone in very well reproduced; the lower notes are remarkably real. But the kindly, inoffensive old."Swannee River" is surely, getting too venerable to be subjected to such irreverent variations.'

Alas the copies I have are not in the best of conditions. They appear not to have lasted in the catalogue more than a year although Auld Robin Grey got to a second stamper showing some popularity but The Swannee River may only have managed a first stamper.  With the opening of the Hayes pressing plant it appears not to have proved worthwhile to transport these matrices with the other 'English' titles from the Hanover pressing plant and instead they would have been destroyed with other redundant material. The spelling 'de Jonge' on The Swannee River label is likely to have been miscommunication between London and Hanover, indeed the name is spelt 'De Jange' on the recording sheets, seems very unlikely that the record was withheld for such a reason a more likely reason was the records wore out quickly on earlier gramophones. Another point worth pointing out are that very few recordings were issued of the flute by G&T up to this time. In total twelve 7" sides and seven 10" had been issued before De Jong's two sides came out with only a further nineteen solo, concerted or concerto sides issued before 1927 in any format marketed by G&T and HMV.


Dating of the records

Only the dedicated discographer need read further but I thought I could explain the dating of these discs and thereby by default the probable dates of Vladimir De Pachmann's first recording.

Will Gaisberg who recorded these records returned from the Bombay on the Wednesday 1st May 1907 and so is known to have begun recording at the City Road studio sometime that month.  On his return the block of 10" matrix numbers was restarted at 6001e the last number used by Will in India being 5560e. Vladimir De Pachmann was the first person recorded by Will Gaisberg on 6001e, 6003e and 6004e [6002e was not issued], there is then a short gap before de Jong's two issued matrix number 6008e and 6011e [6009e and 6010e no doubt being rejected]. There is then a long gap of twelve unknown matrix numbers before a choir composed Fishermen of the North Sea Trawlers (in conjunction with the National Mission to Deep Sea Fishermen) recorded three selections beginning with 6024e.

Will Gaisberg doubtless took a couple of days off after the voyage so probably did not actually start recording again until Monday 6th May. So to get a fix on the date of de Jong's recording sessions so I suggest the following chronology. De Pachmann gave his last concert in London before his two year tour to America on Wednesday 8th May and the The North Sea fishermen must surely be connected with the annual meeting of the National Mission held at Exeter Hall on Friday May 10th 1907. This last was advertised as including 'One Hundred North Sea Fishermen [who] will attend and take part in the proceedings.' So these recordings by the fishermen could very probably have been made on the following day, I would presume that working fishermen were very unlikely to remain in London too long after the meeting was over. I suspect the recordings by de Jong were made on or about Wednesday the 8th May just a few days after de Jong had celebrating his jubilee. I also suspect that De Pachmann recorded on Monday or Tuesday that week but also feel he returned to the studio for a second second session on the Thursday or Friday. It is this second session that may partly account for the missing matrix numbers after de Jong's 6011e. There is a similar gap of four matrix numbers in the De Pachmann's 12" series recorded at the same time, so it is also possible that de Jong may have attempted a longer composition during his recording session.


This is all quite speculative but but it would seem a sensible plan as The Gramophone &d Typewriter Ltd may have thought to make enough good recordings of De Pachmann before he went abroad for a two year period of concert tours, Enough time then to have tests approved before De Pachmann left the UK sometime in the middle of June 1907 [he arrived at New York on the 27th June].

One final point is that I have ascribed the piano playing to Madame Adami with no proof whatsoever. although it is very probable that she is playing on these records for from 1907 she had become the house pianist at G&T and featured quite prominently in some publicity at this time - more about this mystery woman in a later post.