The Broken Melody is one of those pieces that make many of us groan but before you pass this up this a recording with a difference.

It is difficult to get a real idea of what Victorian melodrama was like, early cinema was just in time to give a visual record but still it is nice to know that a very few fragments of sound have also survived. Unlike all other recordings this particular composition the example sets the music within the stage play as van Biene intended. The declamatory style and sentimentality can be heard performed here with all the passion one could expect of the period. 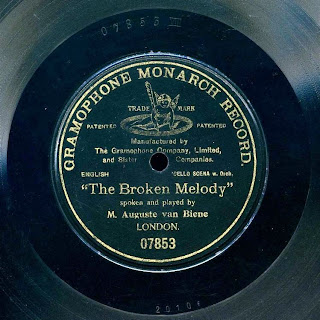 Auguste van Biene commissioned The Broken Melody, A Musical Comedy-Drama in Three Acts, from Herbert Keen and James T. Tanner with the first performance  given at the Prince of Wales Theatre in London on Thursday evening the 28th July 1892. The critics thought it was terrible but the public just kept coming and van Biene eventually gave something approaching 6,000 performances worldwide. As he cast himself in the role of the main protagonist it meant that he had to perform in every one of these performances so it is hardly surprising that he decided in 1912, as much for his own sanity as anything else, that he really ought to stop.

I have not been able to locate a copy of the play in print, doubtless it was never printed although a copy would have been lodged with the Lord Chamberlain for his seal of approval and should still be lodged in the Dept. of Manuscripts at the British Library. In any case, as the play was reviewed wherever it has staged, it has not been too difficult to construct a general synopsis  of how it was staged by van Biene.

I have italicised the section that the record presents:

The leading character is Paul Borinski, (August van Biene) a musician and composer of genius, The first act of the play he is shown struggling along with his young and devoted wife in London lodgings, and trying to dispose of a much-rejected opera. The genius of Borinski has attracted the admiration of the Duchess de Verviers, who does the musician at once a service and an injury, for while she uses her influence to gain acceptance for his opera, she, desirous of supplanting the young wife in her husband's affections, tells her that Borinski has been discovered by General Ivanoff (of the Russian police) to be a proscribed Polish count, and that his only hope of safety lies in her instant flight. The explanation of the position is a little complicated, but the distracted Mabel Borinski is convinced, writes a letter of adieu to her husband, and hurries off. When Paul Borinski returns in the hour of his triumph - that is with his opera accepted - he finds his wife gone and only a letter remaining,  the interpretation of which is distorted in friendly way by the Duchess, and makes it appear that his wife has left him for ever.

In the second act Paul, now all honoured composer, is seen as the lion of an evening at the Parisian salon of the Duchess, where, he gives a 'cello recital that affords the audience great enjoyment. Paul's wife is also in the house, but she has been warned by the Duchess that in the presence of Ivanoff, who is happens to be a guest, she must continue to deny her husband, which she has had to do once already to Ivanoff, and in consequence a dramatic scene ensues, in which Paul's passionate appeals to his wife are met with a cold denial, and which culminates when Paul reveals his rank and name to Ivanoff, strikes him, and challenges him to the duel, the latter having presumptuously interfered between husband and wife.

In the third and final act Borinski, convalescent as the result of the duel and pretty well heartbroken by his wife's apparent faithlessness, is shown apparently more than ever in the toils of the Duchess. His enlightenment is at hand, however, and the revelation of the true character of the Duchess is due mainly to Ivanoff, who produces and gives to Paul the portion of his wife's letter that her rival had suppressed. Convinced that his wife has been cruelly wronged the lonely musician takes up his 'cello once again, and plays the melody that his wife loved, and had been "broken" by the discovery or her flight, and, as faltering he drops his bow, he looks up to find his wife has stolen to his side, and their lives are then happily reunited. 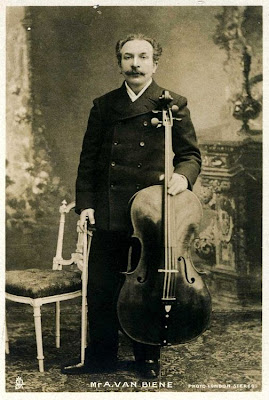 Not a dry eye in the house one feels – I'm sure that with so many performances Van Biene must have got it down to a fine art. It also allowed for several cello pieces to be played including Kol Nidrie, Home Sweet Home and Salut d’amour etc. He made several versions for various recording companies but as far as I am aware nobody has reissued this particular dramatised version and in truth I was only aware of it myself once I read the label and played the record. The record seems to have been popular as it had already reached an eighth stamper by the time my copy was pressed. Stampers wore out after about 500-1000 pressings so even including mishaps several thousands would have been sold. Too few of the pressing seem to have survived as this type of record not being a for a long time thought worthy of collecting and so many copies would have been destroyed or recycled.


Early collectors of this type of record

However there where a few intrepid collectors, one being Frederick Burden Junior who contributed an article for the Gramophone Magazine's  Collectors Corner in January 1941 on musical theatre – he at least saw the value of these records – He mentions the 10” version on GC 7878 but it was much later in an answer to another correspondent to the magazine in a  letter published in July 1955 that the present record is described for the first (and seemingly last) time. 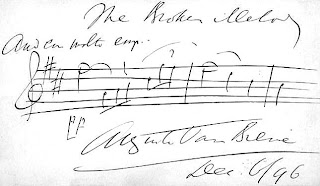 'The Broken Melody - In reply to the letter from Mr. J. F. C. Newitt of Wolverhampton in the June issue of the Gramophone, I trust the following information will help clear up several of the queries regarding the late Van Biene.

Apart from the records mentioned by Mr. Newitt, [Edison Bell 3355 apparently recorded two days before the cellist death!] Van Biene also made a ten-inch single-sided disc for Gramophone & Typewriter in 1903, [GC 7878 (6464b) 9 Jan 1905 reissued on Zonophone X-47852] a twelve-inch double-sided Zonophone in 1909 (Broken Melody/Koi Nidrei) [Zonophone A60 (ac5545f/ ac5546f)  6th Oct 1911], and finally a twelve-inch single-sided Gramophone Monarch No. 07853, also in 1909 [GM 07853  (2010f)  on or about 20 Sept 1907], which was described as a Cello Scena spoken and played by Auguste Van Biene, this, of course, being a condensed version of the famous music-hall sketch that he played all over the world for so many years. He died on the stage at the Brighton Hippodrome rather tragically on January 23rd, 1913. He went right through his sketch without faltering, as usual, and as he reached the final scene he fell back in his chair and the bow slid from his fingers. This had been the end of the sketch for many years, but in this instance it was the passing of the famous old 'cellist and performer. I have all three of the above records mentioned above in my own collection. A graphic account of the above incident is given in Vaudeville Days by W. H. Boardman, published in 1935 and also in The Talking Machine News for 1913.  Peacehaven, Sussex. Frederick Burden.

The errors in dating discs are due, in part to a lack of knowledge of matrix numbers. – a topic for another day

A short biography of van Biene by Dr Brenda Scott of Duke University can be found at this link although there is plenty to find on the web. Of van Biene's playing Arthur Broadley in his  Chats to 'Cello Students 1899 is depricating 'Van Biene is of the exaggerated artistic order, all the time he is playing constantly striking some fresh attitude. If Van Biene had again to take to concert work, I have no doubt that he would calm down a little in this respect, his exaggerated style while being very effective on the stage, would not be tolerated on the concert platform.' No matter the public could not get enough of his act and I think the illustration by Phil May gives a fairly good impression of the theatricality of his role in the illustration above. The portamento is possibly a bit excessive, but then it had to be to bring the house down.

Anyone who has got this far down the page may be interested in how this was recorded - As far as I can judge there would have been two horns used, one directed at the cello,and one directed at the orchestra with van Biene in between. In the picture below, also from 1907 it shows the arrangement for Edward Lloyd (tenor), Madam Adami (piano) and I think W.H. Squire cello. For the van Biene recording the orchestra would be place where the piano is and further back with van Biene directly in front with  two horns directed at the bridge of the cello and another to van Biene's face.

Thus van Biene's head being blocking some of the orchestral sound and it is only at the end of the recordwhen  he would have moved his head aside the the orchestra volume increases. There may actually have been yet another horn directed towards a Stroh cello [a modern YouTube video can be found through this Link and gives you a good idea of the sound it makes], this together with a tuba can be heard enhancing the the lower notes of the solo passage. 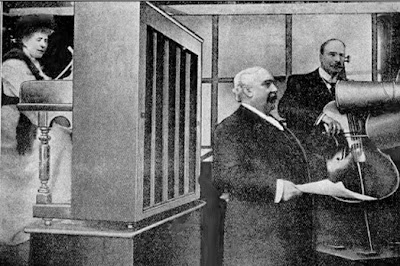 The arrangement of the horns meant that they had to be fixed together with a hard rubber joint - fluid dynamics come into play in this arrangement - if you play into one horn some of the sound goes towards cutting the disc but also a certain amount comes out of the other horns - that together with the internal resonance of the horns themselves meant that some notes sound 'odd' - in the photograph can be seen a couple of bands of tape round one of the horns to dampen this problem. one of these problems of resonance can be heard on the A note at 1.42.
Posted by Jolyon50 at 15:48