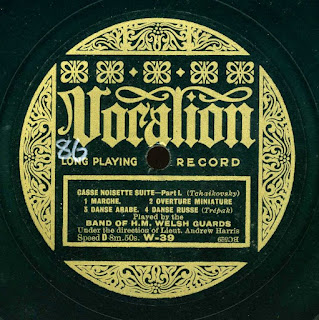 One real problem to bedevil 78s before the advent of the LP age was the how much music could be fitted on each side.
Noel Pemberton Billing (1881-1948) had an aswer as he realised that if the needle could be made to travel through the groove of a disc at a constant speed then more could be recorded on each side.
Pemberton Billing was eccentric to say the very least. His biography on Wikipedia reads like some Boy's Own story. Early aviation pioneer and pilot in the WW1, independent Member of Parliament, politically very right of centre, getting carried out of the House of Commons for hurling abuse, publishing periodicals including one called the The Vigilante including such purple stuff by him as 'The Cult of the Clitoris', then defending himself in the ensuing liable case and winning, homophobic, inventor, the list just goes on and on, if not insane he made a very good impression of being barking mad. But this is getting off the point for his claim to fame on this blog is through the invention and marketing of World Records.
Some technical stuff. At 78rpm a standard 12 inch or 30cm record gets through some 275 metres of groove – at a constant 78rpm the outer edge of one turn of the disc traverses about 0.95 metres groove with the needle travelling at some 1.25 metres per second. By the time the record enters its last turn needle only has to get through 0.38 metres at about 0.50 metres per second.
Pemberton Billing noted that this 275 metres of groove was being traversed faster than was really necessary at the outset of a disc and it would be better if the speed could be made constant through the groove. At about 0.50 metres per second a record side could accommodate 9 minutes of recording time without any loss of recording quality.

His invention, a fearsome looking lump of wheels and governor had to be screwed to the side of the turntable to manage the speed of the turntable. The patent explains the concept in the usual patent language but in simple terms a large rubber wheel ran on the record surface this was connected by a worm drive to a governor, this governor restricting the wheels rotation to a constant speed. The large wheel is also connected through a thread drive which allows it traverse across the record to the centre, something like a liner pick-up arm traverses the record towards the centre. By this arrangement the turntable speed could be slowly increased in speed from 30 to 80 rpm however the speed at which the groove travelled under the needle woodlouse be constant - maybe read the original patent as it is easier to show than explain [Patent]
Anyway this can be done by using software as long as we can know the initial and end pitch of the record and calculating the rate of acceleration over a side – I have pitch the record at A at 452Hz the standard Military Band pitch in the UK at this time. Each side actually has a timing printed on label; the first side comes to exactly 8m 50s the second side is printed at 8m 10s although I make it 8m 12s at A 452Hz– quite probably the pitch could have gone to A453.8 as the room temperature increased but this is so slight I have left both sides at A452. These timings printed on the labels must mean a stopwatch was probably used during the recording session – maybe printing on the labels was part of the advertising. An oddity in the recording is the slight hum on side one reducing from 216-210-204Hz and on side 2 moving through 222-211-213Hz – this must be to do with the recording mechanism but can't fathom what would cause such inconstancy – anyway it is not annoying
Enough of this waffle. World Records never had any star names – The performers included military bands, dance bands, quite a number transferred of which came from Emerson masters, vocal records that included Carrie Herwin, Robert Carr and John Thorne, a few educational records, Scottish Pipers and then good bit of Chamber music by Leo Abkov String Quartette – records I have never seen nor heard of anyone having; anyone out in the æther have any of these?
Vocalion Records manufactured the records with only 163 examples known to have been issued between 1922 and 1924.
Pemberton Billings left for Australia in 1923 endeavouring to further the export of the records and did not return to Britain until 1926. In the meantime Vocalion purchased all the rights to the records in January 1925 and began to issue there own Vocalion Long Playing Records Only 19 of these are known but the venture proved hopeless and by middle of 1926 the venture had stopped. These records are very uncommon, they must have been sold in very small quantities and of those sold very few seem to survive.
Of the artist on this particular example a short history can be found [here]  from which I quote:-
'The Welsh Guards are the youngest of the foot guards, being raised in 1915. On 8 September of that year, Mr Andrew Harris, of the Royal Artillery (Gibraltar) was appointed to be the first bandmaster, and in November the band itself was formed. The regimental history tells us that the funds to buy the instruments were provided by the City of Cardiff.

'With the prospect of having to live up to the high standards set by the existing guards bands, the Welsh Guards faced a tough challenge. Their first appearances on 1 March 1916, St David's Day, however, dispelled any doubts that may have been harboured; a guard mounting at Buckingham Palace followed by a performance at a Welsh Patriotic Meeting at the London Opera House with Lord Harlech and Major-General Sir Francis Lloyd in attendance, demonstrated clearly the musical quality of the new band.
'Coming together in the midst of The Great War, it was not long before the bandsmen were sent overseas. On 28 October 1916 they proceeded to France for duty with the Guards Division, meeting the 1st Battalion, then returning from the front line, a few weeks later and playing the guardsmen back to their billets.
'In May 1917 the Band, resplendent in full dress, formed part of the massed bands of the Brigade of Guards which gave concerts at the Trocadero and the Tuileries Gardens, Paris. Later the massed bands visited Italy performing in Rome and Milan; during the tour, each musician was presented with a silver cigarette case by Queen Elenor. In May 1918, at the request of the American Embassy, the Band played at the Memorial Service in Paris, and in July 1919 it took part in the great Victory March in Paris, where it had the honour of playing the Colours of the British Army through the Arc de Triomphe.
'Bandmaster Harris was commissioned as Lieutenant on 1 March 1919, and went on to become senior Director of Music, Brigade of Guards, finally retiring in the rank of major at the end of 1937. At his final appearance at the Albert Hall for the Festival of Remembrance, he was able to tell the audience that he would be sitting with them the following year as an old comrade having completed fifty years service.'
Pearl issued a CD of the band under Harris but mainly of short pieces – The performance oin this World record is good efficient stuff.
Two films on the Pathe site show the band in 1926 and 1929 Two short films of Pemberton Billing can also be found on Pathe too.
Much, if not all, of my information comes from World Records Vocalion "W", Fetherflex and Penny Phono recordings: a listing by Frank Andrews; Arthur Badrock; Edward Samuel Walker, 1992