Acoustic organ music with a twist

Probably the first attempt at recording this famous Widor toccata and the Lemmens too for that matter, but what exactly are we listening to? 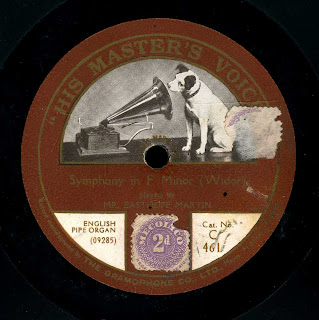 Organ music was all but impossible to record under the acoustic process, the bandwidth restriction gave very unsatisfactory results and it was not until the advent of electrical recording in 1925 that the organ became a reality for the gramophone enthusiast.

A few valiant early attempts were however made. On the 17th of January 1913 an 'English Pipe Organ' was either installed in the Hayes recording studioor the recording equipment was transported to the Aeolian Hall in New Bond Street. Fred Gaisberg was in charge of the recording session that day and he may also have enticed Easthope Martin to record. In all, seventeen titles on twenty-one 12" waxes and two 10" were cut from which fourteen were issued. Designated for double-sided issue on plum label records at 4s [20p] each, the first four of these records were issued in April 1913. I luckily have a copy of the original flyer that HMV produced that month, interestingly the organ on the front bears no comparison to what was actually recorded and the two 'unsolicited letters' quoted are possibly due to the forwarding of sample discs prior to formal issue. 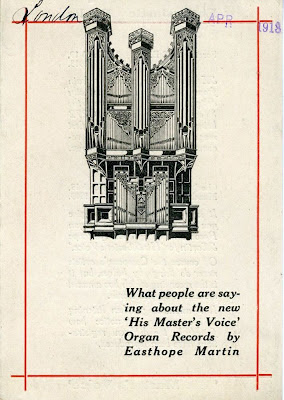 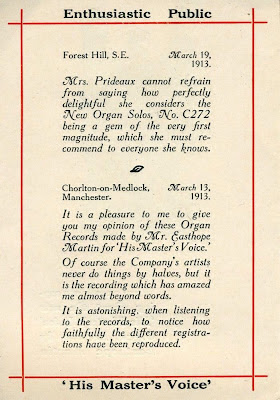 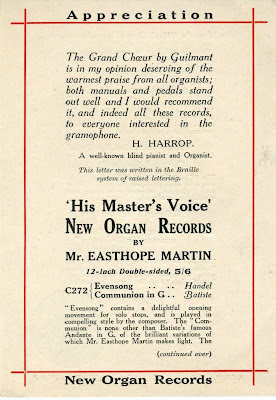 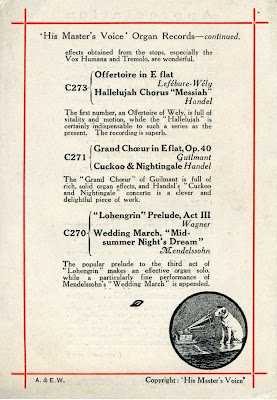 Another two records were issued in 1914 but our record had to wait until July/August 1915 to see the light of day.  About a hundred 'new' double-sided records were published in one go and numbered roughly from C 400 to C 500. They seemed to have been an odd collection of previously available single-sided issues and unused masters issued in order to bolster up the main catalogue for 1916, this was published in October 1915 to be ahead of the Christmas market.

I have re-balanced these two sides as much as I dare and although a good amount of rumble is unfortunately still prevalent I hope you are impressed at how much of the low frequencies Fred Gaisberg managed to record.
The organist for that day was Frederick John Easthope Martin (1882-1925). Born in Stourport, he studied piano, organ, harmony and studied composition with Samuel Coleridge Taylor, at Trinity College London and then joined the Aeolian Company in London as an organist, pianolist and demonstrator. He wrote a number of choral works, songs, piano pieces and chamber works but unfortunately contracted tuberculosis at quite an early age and died aged 42 at Hampstead in London. More information on Easthope Martin can be found Here and Here.

The above picture I think holds the clue to these records. What we hear is not simply Martin playing an organ but that this is an Aeolian pipe organ, and what we are hearing is Martin's interpretation of Aeolian Organ Roll numbers 466 [later renumbered to 51466] and 52. A modern transcription of this roll can be heard on Youtube Here. Having looked over the 1919 edition of the Aeolian Pipe-Organ - Catalog I see all the items recorded by Martin are included and one can only assume that Martin actually recorded most of these Aeolian Rolls in the first place. I have tabulated the roll numbers to the recording session below. 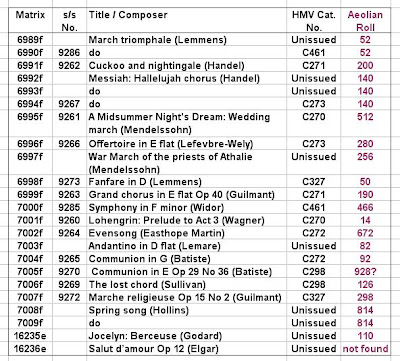 So what we appear to have on these recordings are Aeolian Rolls, probably recorded by Martin, who then brings them along to the HMV studio and then interprets his own previous recordings. I have not determined if the idea of recording was to promote the Aeolian Pipe-Organ or not. I don't think Aeolian could have been impressed by the sound of these primitive recordings and their name was not applied to the record labels. Gaisberg and indeed HMV maybe thought otherwise and went ahead and pressed the records for sale.

Martin returned to the studios later in 1913 to record a number of piano pieces under a pseudonym, these maybe Pianola recordings. One other facet to dwell on is that Nikisch was quite keen on the pianola and said 'I recognize it as one of the greatest inventions of the century.' Possibly some sort of introduction was facilitated by Martin to Fred Gaisberg and HMV to record orchestral music with Nikisch and the LSO in June 1913? 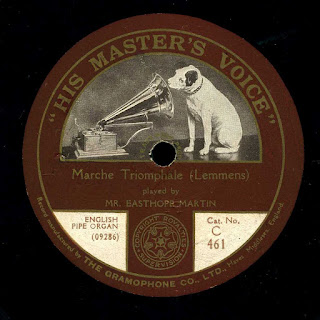 Lastly, as I am getting more than a bit completest here, these are the descriptive notes transcribed from the Aeolian Catalog of 1919:-


466  WIDOR: Symphony No. 5 Toccata (Fifth Movement)
Following out the scheme of departing from the conventional order of symphonic movements the composer has chosen a Toccata for his final movement in this interesting symphony. This movement is, in several ways, the most attractive one of the entire work. Its whole course is stamped with buoyant swing—save the very close—and the theme of the Toccata is most spirited. Widor plunges precipitately into the announcement of this theme, voiced in the high treble; then there enters a bass melody that accents the theme woven by the treble. Gradually the bass assumes importance and volume, and finally it is thundered forth. The very close of this movement and of the symphony is a chorale-like version of the Toccata theme.


LEMMONS: March triomphale
With a curtly expressed theme—one of heroic character—this March auspiciously opens. It impresses the quality, hinted at in its title, upon the listener with the very beginning, and this idea is still carried out further by the crisp, sharply defined rhythm and almost defiant character of the succeeding section. The music rises now to a climax, and at the crest of this emotional wave there is trumpeted forth the first section of the March most brilliantly. After this the music grows gradually more subdued, and dies leisurely away, but the initial mood is fully restored by the jubilant chord upon which the work ends.
Posted by Jolyon50 at 21:13